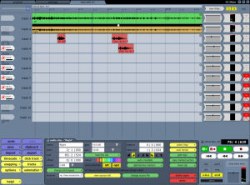 After receiving an email from Mackie stating that the long-awaited version 2 of Tracktion (T2) was available as an upgrade, I investigated further. With the full price of T2 noted as $199 (approximately £105 at the time) but with some online retailers already reducing this to $149 I wondered how much the upgrade would cost, thinking that, at the least, it would be around $50. So it was rather a shock when I read that it was only $20 (£10.54). Ok, so there is a small catch: the full version of T2 came bundled with a whole selection of plugins - though some of these are freely available, anyway - while the $20 upgrade gave you just the key to unlock the downloadable demo.

So, what do you get in T2 over T1? Well, as I've only just downloaded the thing then I haven't really had time to play with all the extras. However, here's a quick list:

So, is it worth the $20 upgrade? Damn right it is, and anyone who, after deciding to go the Tracktion route, waited until T2 came out before purchasing is probably now kicking themselves silly!

Please note that I have not upgraded to V3 - this isn't any sort of comment on that version. It's just that, for a few years, I no longer had the time to actually do much in the way of music. Since then work on the product seem to have unfortunately come to a halt which suggests that it would be foolhardy to spend money in upgrading to that version.