We formed in late February 1977 after Dave Smith placed an advert in Cookes Band Instruments' shop window. Neither Paul nor myself had played live in bands before though I had got together with a few work mates the previous year where we rehearsed a selection of songs mainly by the Beatles, T. Rex and the Wurzels (the latter was not my choice!). Polo had been drumming with quite a few bands and Dave had played one gig in a band called Dick Dangler and the Testicles!

Sometime in May or June we attempted a studio recording at Touchstone Studios which were located off Duke Street. Three songs were recorded:

Paul had wanted to record one of his songs but had laryngitis (or some other throat ailment) at the time and couldn't sing. 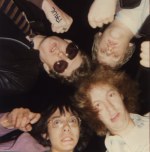 Somewhere between 24th September and 8th November we 'lost' Paul Cheetham due to 'musical differences' (as they say). Therefore, Dave had to learn to sing lead and play bass simultaneously. We tried out a couple of other guitarists after Paul's departure but none seemed to fit in and so we ended up as a three-piece.

Later rehearsals at Ranworth Village Hall were taped onto cassette. Some were edited into a demo tape in Autumn 1977 and sent to various record companies (who didn't want to know). The first Wymondham College gig was taped on a portable cassette recorder that had nearly flat batteries held in the air by someone in the audience - it's hard to make out what was going on - you had to have been there to appreciate that tape!

Please go the dedicated Toads web site to download some of these recordings. 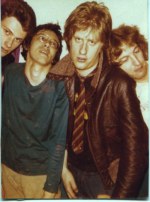 At the end of 1977 we had decided to 'take some time out' and try to improve our material. Unfortunately, in early 1978, the enthusiasm died out and the group broke up.

Paul moved on to do his own thing and you can find out all about him on his own site.

The pictures displayed here are the only ones that, as far as I know, have survived from the period - I do know that others were taken by members of the fanzines Vomit and Mutant Flyer but the ones they reproduced in their magazines were, unfortunately, unrecognisable.

After the Toads split up Dave Smith played bass for a local MOR group, Misty Web. He then poached their lead singer, Neil Currier, and along with the ex-Rasputin guitarist Steve Fowler and ex-Toad drummer Polo, formed the Broadside Outcasts. They performed at least one gig with an added saxophonist (I did the mixing for them at that gig) at the Woolpack pub in Muspole Street (date unknown). I also recorded one of their rehearsals onto cassette.

The band's name was then changed to Silent Noise after one of Dave's songs. In April 1979 they cut one self-financed record (1000 copies): I've Been Hurt (So Many Times Before) c/w Heart to Heart on the Easy Records label. It achieved two air-plays on Radio 1 (John Peel, of course) and they also mimed to it at one of Peel's gigs at the UEA. I believe Radio Norfolk also played it at least once in 1980 on the Wally Webb Show which, at the time, had become the local outlet for hopeful groups. Webb also played Nightclubbing which, finances permitting, would have been the second single. However, lack of funds resulted in it never being pressed onto vinyl at the time.

Silent Noise played a few gigs though I do not have any record of the dates. I certainly attended one in Acle sometime in February 1979 (notable because of the accident on the journey back which resulted in a broken collar bone for Dave Smith) and another at a nightclub near Anglia Square (Pennies?). I also made some 4-track recordings of the band during 1979.

In 2002 I was contacted by Steve who runs the www.lowdownkids.com web site - he wanted to put out a Silent Noise LP - yes, real vinyl! - and, for a time, this was available from his site. Later on Detour Records re-mastered the tracks and put out a CD which can now be bought or downloaded from Amazon.

(A slightly different version of this page can be seen on the Detour Records Bored Teenager's web site.)